I recently spent a few weeks travelling around Thailand, a journey that included the visit to the country’s two main cities – Bangkok and Chiang Mai. In those places, but also in other urban and non-urban locations, one cannot but notice certain manifest characteristics of Thailand’s energy systems. Though primarily a tourist’s impressions, the four issues presented below are the most striking features I noted on how energy is used the urban areas of Thailand. They are complemented with data and notes taken from references. All pictures are my own.

The lack of access to quality energy carriers such as electricity and natural gas has been referred to as ‘energy poverty’ and is a condition present in many parts of developing countries, especially in rural areas.  Thailand, an upper-middle income economy since 2011 according to World Bank classifications, seems to have solved this issue to a large extent. Thailand’s National Statistical Office (NSO) reported in 2004 that 98.9% of the country’s households had access to electricity supply, and subsequent independent surveys in the slums of Bangkok and the city of Khon Kaen (an economic and political centre of North-Eastern Thailand) have confirmed this high rate of connection to the electricity grid (Shrestha et al., 2008). The same study indicates that practically all slum households living in the slums of these two cities reported owning a refrigerator and a TV in the mid-2000s, and 85 to 90% of them declared using Liquefied Petroleum Gas (LPG) for cooking.

Thailand’s high rate of household access to the electricity and LPG supply has been attributed to various factors (Shrestha et al., 2008): rapid economic growth, which has increased households’ purchasing power and the consumer base needed to provide subsidies;  a sufficient power generation capacity that has kept pace with the growth of the demand, an achievement for which private investment is given some of the credit; a successful electrification programme started in the 1970s that managed to bring electricity to all settlements of the country in 15 years; and a full-cost recovery tariff structure with subsidised prices for low-income households sustained by industrial and commercial consumers.  In the year 2008, LPG cylinders were also heavily subsidised as their selling price was 60% below import price.

This high rate of access to the power supply cohabits with a widespread informality in the distribution of domestic electricity. Even though households are allowed to be hooked up to the grid with some sort of temporary registration or easy-to-obtain ‘quasi-ID’, by the late 2000s over 30% of Bangkok’s homes (and 90% of the surveyed slum households) got their electricity through neighbours (Shrestha et al., 2008). Densely entangled wires hanging electricity poles are a recurrent sight in Thai cities, perhaps illustrating the pervasiveness of the phenomenon – see picture below.

Not all energy services typically belonging to the domestic sphere are provided at home. Patent examples are the cooking of meals consumed when eating out, be it for leisure or during working hours, and the cloth cleaning services offered by laundries. The price paid for these services includes the cost of the energy consumed, which is not computed as such in household expenditure surveys. 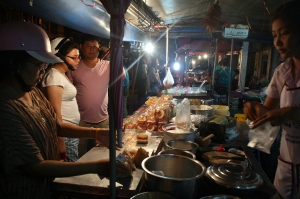 In Thai cities, street food is sold almost everywhere and anytime in little street stands operated by vendors that bring cooked meals or prepare food directly on the street. The widespread availability of ready-to-eat street food seems to have changed the eating habits of Thai people, which has resulted in the ‘externalisation’ of a core domestic energy service (cooking) to the outdoors. According to Thailand’s National Statistical Office (NSO) data compiled by Shrestha et al. (2008), 16% of the households in the Greater Bangkok area did not have in kitchen in 2005.  This trend is relatively recent as street food is thought to have displaced home cooking in Thailand only after 1970 (Higman, 2012).

Street food micro-enterprises belong to the informal sector and have been neglected as a source of income and employment opportunities in developing countries. As argued by a FAO study, for producers it is an attractive economic activity with low capital and skills requirements, a degree of flexibility and relatively higher income earning opportunities. Consumers benefit from the intense competition and low prices of street foods, which directly competes with home cooking. The same source indicates in Asia and Africa 15 to 50% of a household’s food budget is spent on street food, which is likely having a significant impact on domestic energy consumption and expenditures.

The survey of 200 slum households conducted by Shrestha et al., (2008) in 2007 indicates that slum dwellers of Bangkok were spending 16% of their income on domestic energy (including gasoline for private transportation), and 28% of their income in the case of Khong Kaen. In these two cities, slum households living below the poverty line reported having a higher energy burden in spite of their lower energy expenditures and consumption. At the time of the survey (2007) electricity and fuel for transportation accounted each for over 40% of total household energy expenditures among surveyed households, with LPG and other cooking fuels representing about 10%.

Related to the issue of illegal access to the electricity network, being connected to the grid through neighbours decreases the affordability of domestic electricity. Even though an illegal connection to the neighbour is cheaper than the official connection fee, which makes it initially attractive to poorer households, this solution results in a higher price per kWh, as much as twice as the tariff charged by the utility (Shrestha et al., 2008).

As income per capita grows, indoor cooling provide by air conditioning gains importance as a domestic energy service. In Bangkok and other cities in Thailand, air conditioning units can be seen hanging from the façades of very different types of residential buildings, suggesting that this energy services is not only available in expensive dwellings and higher-income neighbourhoods. Having the possibility to cool the indoor living space of the household is more than a matter of comfort – an issue that is not necessarily negligible given the constantly high temperatures and relative humidity that are characteristic of the country’s tropical climate. Living in an air conditioned home, which reduces both indoor temperatures and humidity, serves as a protection against disease-transmitting mosquitos and harmful microorganisms (Reiter, 2001; Sookchaiya et al. 2010).

Unequal acces to air conditioning; houses by a canal in central Bangkok

The externalities of transportation in cities

Mobility seems to be an energy service of paramount importance in Thailand’s cities. A never-ending symphony of vehicles circulating in all directions is a striking feature of the cityscape for the foreign visitor. Few pedestrians venture to walk on the poorly kept, sometimes non-existent, street sidewalks, and the local population seems to rely instead on a very large array of collective and private means of transportation including buses,  boats, taxis, tuk-tuks (a local form of auto-rickshaws), private cars and motorcycles. As a result, traffic jams, urban air pollution and other traffic-related issues are a growing problem in the country’s urban areas (see Leong et al., 2002).

The high rate of motorcycle ownership in Thailand has been pointed as an indicator of an early stage of economic development. Whole families can be often seen moving from one place to the other on low-cost motorcycles. Even slums dwellers report having a high rate of motorcycle ownership (62% in 2007), which is partially explained because many of them work far from their place of residence (Shrestha et al., 2008). It is believed that cars will progressively substitute motorcycles as income per capita grows because of the “prestige, convenience, comfort and safety” of four-wheeled vehicles (Pongthanaisawan and Sorapipatana, 2010), which will have consequences on the already substantial external effects that transport is having on Thailand’s urban population.

View all posts by stiradoherrero